Over the last few years we have seen increased use of precast twin wall systems with a 150–200mm void in the centre. The precast panels are referred to as ‘biscuits’ and are held together with reinforcement. This reinforcement is structurally sufficient to infill with just concrete.

These systems have become popular as the complete structure can be craned in to position, replacing the need for ‘formwork’. The gaps are then blocked between the precast panels (biscuits) and the whole length is poured in one go.

Use with the Xypex system

We have now undertaken a number of projects using this system with Xypex C-Series Admix in the concrete mix. Where available, we would insist on the specification SCC (Self Compacting Concrete). However, we recognise that these mixes are not always available at all plants. As an alternative to SCC, we have accepted an S4 slump (160mm–210mm) and always 10mm aggregate. Results have been good, but the two main considerations remain the placement of concrete and the joints.

Placement – The placement is normally not an issue if SCC is used. We have never experienced honeycombed concrete, but rather supply levels interrupted. In one instance a cold joint was caused due to the concrete pour going beyond the opening time of the concrete plant, which closed. This resulted in an issue when the pour was more than a metre short of the top of the panel and could not be reached, as the biscuits could not be taken down.

Joints – Joints between the walls and the slab can also be a potential issue. In our experience the precast contractor prefers a recess in the slab to place the precast, normally 50mm deep. Within this packers are used to align the
precast units and these are then at the surface and under tension.

Hydrophilic waterbars – The UK market would normally use hydrophilic waterbars, however the time taken to place precast units means that the recess can be exposed to the elements for a long period, potentially many weeks. This has issues, such as the collection of rain in the recess, where the hydrophilic is placed. This will lead to premature expansion making the joint useless. Equally site dust and other debris will collect here, which is hard to remove once the access has been reduced. In addition the hydrophilic may be physically damaged when the installation of the precast panels occurs.

To overcome these potential issues, we have developed a unique construction joint that utilizes Xypex Concentrate dry-pac. This is placed to connect the Xypex Admix enhanced slab and wall infill together. It is placed on the outside of the joint prior to back filling and to ensure that water is stopped at the furthest point.

Once the concrete infill is cast, the Xypex C-Series Admix enhanced concrete can never be physically inspected for compaction. If water makes its way in to the building there is no way of locating the source.

For example, a major leak occurred in one project, which ultimately had travelled up to 10 metres from the source to the outlet. The egress was so large it could not have been a crack of 0.4mm or less. The source was traced to a light well, where run-off water was over topping the wall with Xypex C-Series Admix. This breached the DPC and the water was making its way across the outer biscuit and the Xypex Admix infill, entering the minor gap between the inner biscuit and Xypex, finding an outlet further along. Improving the installation of the DPC and reducing the external ground to the correct level resolved this.

Almost irrespective of the problem, because the precast panel cannot be removed to inspect the waterproof barrier, the only way to resolve an issue is to isolate it.

If the gap between the panels is not wide enough, it is necessary to cut the inner biscuit, giving a minimum of 25mm wide between the panels to expose the Xypex enhanced concrete inside. Xypex Concentrate dry-pac should then be applied around the whole square of the panel to coat it effectively, holding the ingress behind the panel and terminating it from progressing laterally. 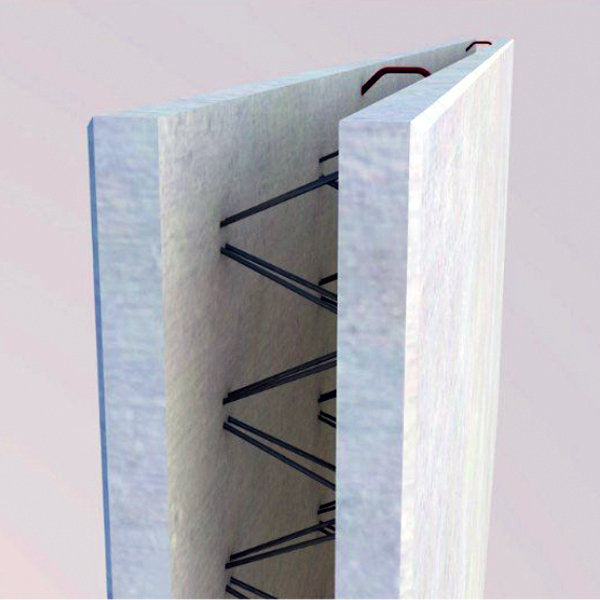 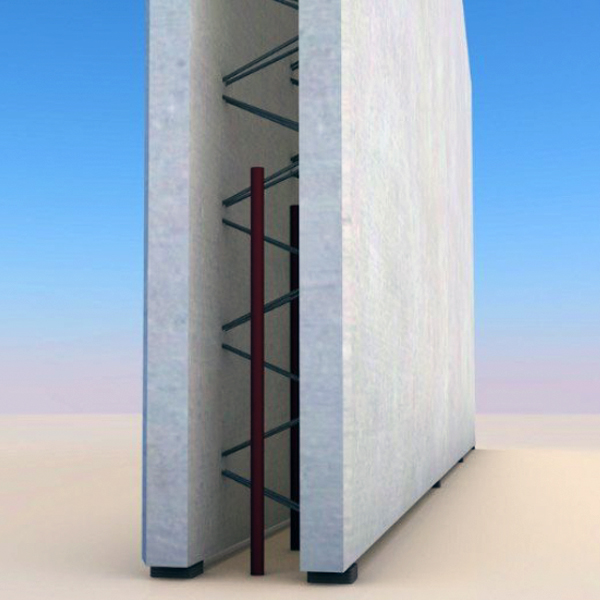